Designers use everyday materials such as cardboard and concrete to create masterpieces. When Karton Art first launched its gilded grandfather clock, or its Archeo range of bespoke furniture, some eyebrows were raised. 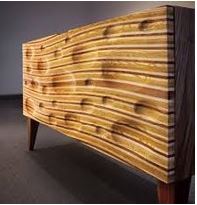 One design looked as though a new piece of furniture was poking out of the corners of a packing box, while another appeared to be part traditional chest, part FedEx delivery. However, the Hungarian design company - comprising the husband-and-wife team of Andras Balogh and Edith Szilvasy - did not make a mistake. Rather, it was further establishing itself as the leading voice in a growing design subculture, pushing a material that until recently has been considered to be forbidden: cardboard.

The use of cardboard has many advantages - high-grade cardboard is recyclable and lightweight, making transport to market and between homes cheap and simple; it is tough but is easily replaced if damaged. However, acceptance of sophisticated designs in what is still perceived as a "cheap" material has been slow in coming. After all, it was back in the 1950s that legendary designers Charles and Ray Eames were first experimenting with cardboard furniture.
"You can even customise it. You just need a good pair of scissors," Szilvasy says. "Actually, cardboard is a very tactile, even sensual substance, velvety to the touch, and yet there is also something childlike about it - it seems to be a universal experience that we've all built a den from cardboard boxes. "Despite this, when we launched, people would look at the furniture and say the whole idea was great, but we must be crazy - why would anyone want furniture made out of cardboard? But attitudes are changing."
Certainly Karton Art is not alone in seeing cardboard to be as valid a material as more "noble" options such as metal, stone and glass. Designers such as Giles Miller and Dries Verbruggen have created pieces using cardboard, while at this year's Salone del Mobile - the leading international fair for the design industry - Russian studio Wishnya showed its Culle line of striking, spiralling lamp shades - also made of cardboard.
Cardboard is hardly the only readily-dismissed material that progressive designers are now considering: Korean designer Eun Myung-soh, for example, has created The Lines, a cabinet with sides comprising multiple coloured elastic bands that mimic the stripped latticework of traditional Korean housing. Brazil's Nolii has produced striking forms for its lampshades by using a water jet to cut a thin sheet of metal which is then bent into shape. And German designer Kristian Knobloch has designed a stool made of plywood pieces held together by a single industrial belt. "These are relatively 'cheap' materials, but that doesn't stop the design from having an appealing aesthetic," says Knobloch, who is working on a wardrobe made from cotton fabric. "In fact, what more designers are showing over recent years is that these supposedly 'cheap' materials add their own interest to a product. They have textures, surfaces and other properties of their own that designers want to explore." Ian Hunter, a materials analyst and director of the London-based Materials Council, a specialist consultant to the international design industry, says there is keen interest among designers for less expensive materials. "These may have certain connotations still for some consumers, but they are becoming more aware of how actually it's their setting and context and treatment that matter," he says. "Concrete is not considered luxurious. Polish it, however, and it can be very luxurious. That kind of treatment of lesser materials can actually be very attractive to the savvy design consumer - they want to be surprised."
Hunter cites Stefan Zwicky's version of the iconic, cube-like Le Corbusier armchair, reimagined in concrete - for outdoor use, perhaps - and the work of Dutch design studio Vij5, which has created cabinets using its own material, newspaperwood - a wood-like material complete with grain that is made from old compressed and cut newspapers. He believes such materials appeal to designers because they often embody an intriguing back story - or at least because they appeal to a younger generation. "They get the ideas that designers are exploring when they bring their curiosity to playing with unexpected materials - that not everything has to be made out of marble or gold to be any good," says Cyril Zammit, director of the Design Days Dubai fair.
The event recently presented furniture and design objects made out of "grown" ceramic, from the Chile-based studio Great Things to People, and plastic tubing, from British designer Tom Price. London-based Poetic Lab uses treated bamboo in its furniture pieces. "Younger consumers have less of that initial suspicion of alternative materials. And once those materials can be explained, that suspicion held by more traditional consumers tends to pass too," Zammit says. "They don't look at plastic, for example, as noble - but they can be shown how it can be."
Certainly, the way supposedly "cheap" materials are handled can make all the difference to overcoming deeply-entrenched perceptions regarding their value, not least because of the effect achieved. 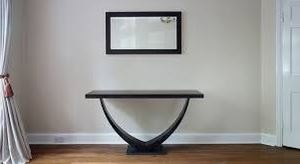 Designer Meike Harde, for example, uses fine wire mesh to create the doors on her cabinets, leaving them artfully semi-transparent. And Basel-based Studio Colony has developed a method by which thin pieces of porcelain are drilled with tiny capillaries which absorb pigmented ink, much as a leaf does with water. The result is the endless possibilities of patterns that are not printed on but actually embedded into the heart of the material. And, in one of the most striking pieces on show at the Salone del Mobile, bamboo has undergone a mix of modern dyeing and traditional charcoal-smoking processes to keep it looking green and fresh, and is then used by London-based design studio Poetic Lab as the legs for its Bamboo Forest glass-topped tables, with the elements held imperceptibly together by a specially-developed resin.
"Go to China and [you'll see] a lot of cheap street furniture is made from bamboo, and that can certainly affect bamboo's image," says Poetic Lab co-founder Shikai Tseng. "Yes, bamboo may be plentiful. But finish it with craft techniques, and you can bring its quality up to the level of much rarer materials. "Smart consumers increasingly understand that it is what you might do with the bamboo that matters, that you can apply sophisticated treatments to make a humble material sophisticated too."
Many of our designers will do free estimates so why dont you give us a call today or send us an online enquiry.
Back to content